In this section we offer a selection of photos of the town of Kpalo-Bli and its inhabitants.
You will discover in pictures the evolution of various development projects undertaken by the association. 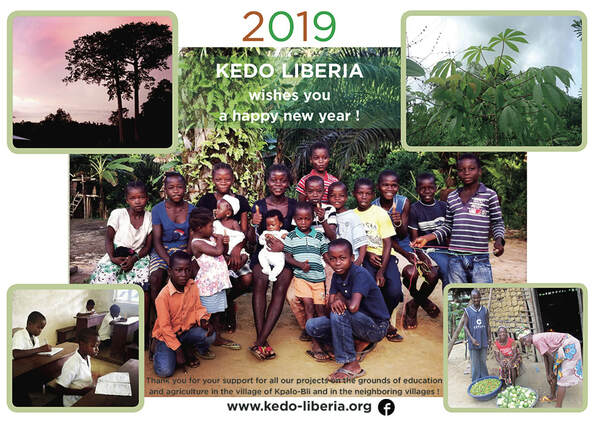 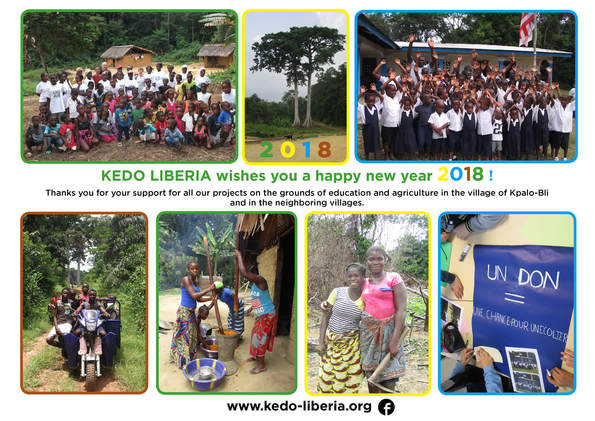 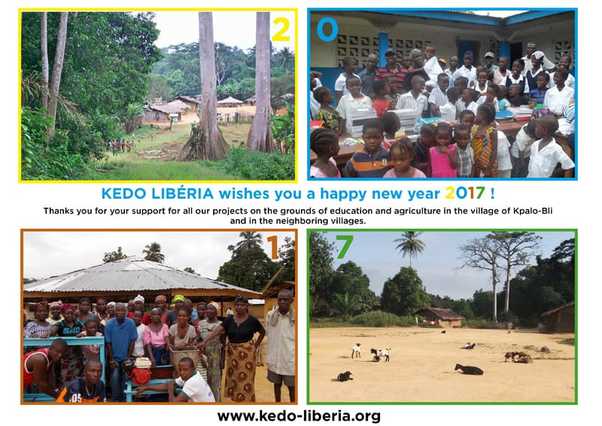 JANUARY TO JUNE 2016
SOME GOOD NEWS TO MOVE FORWARD OUR PROJECTS
This first semester of the year has brought some excellent news for the organization.

Organization beneficial to general public with an humanitarian mission
Since the beginning of 2016, Kedo Liberia has been recognized as an organization beneficial to the general public with an humanitarian mission and can issue fiscal receipts to its donors.  This means that the donations or membership fees to Kedo-Liberia by tax-payers residing in France are tax deductible on the income equal to 66% of the amount, within the limits of 20% of the taxable income.
Example, for a donation of 20 euros you pay only 6.80 euros in reality, and 30 euros would actually become 10 euros.

Trip to Liberia by the organization’s president, James Thomas – April 2016
In April 2016, the president of KEDO Liberia travelled to Kpalo-bli to do an assessment of the projects on the ground (something that was not possible to undertake in 2015 due to the risk of the Ebola epidermic).
Education :
School  supplies were delivered in April, and among which were the magnificent wooden abacus made by the students of  a professional training school – lycée d’ameublement de Saint Quentin – located in the Picardie region. The partnership with this school was made possible through the initiative of Mr. Matthieu Roucou, an Industrial arts teacher and also a staunch member of KEDO Liberia.
Agriculture :
On the establishment of the community cassava farm, we have accomplished one major phase by purchasing a cassava grinder to produce gari – thanks to donations from our partners. This machine will reduce the work load of the farmers, especially the women who normally  carry out the transformation of the cassava manually. The project still continues with  financial support from the Agence des Microprojets (see paragraph and pictures much further).

The support from the Agence des Microprojets
Since June 2016, the Agence des Micropojets has granted a partial funding to KEDO Liberia for the collective community cassava project. We are extremely delighted and greatful for this gesture.
To help us raise the entire funding necessary to complete the realization of this project, you can also contribute by sending your donations – tax deductible – through the guaranteed electronic payment system of the Agence des Microprojets.
Our next objective in the coming months will be to purchase  tow motor-bikes (tuk tuk) to enable the farmers transport their products to the nearest commercial center (see pictures below in the slideshow).
Support the cassava farm projecT >>>
ABOUT the other projecTs >>> 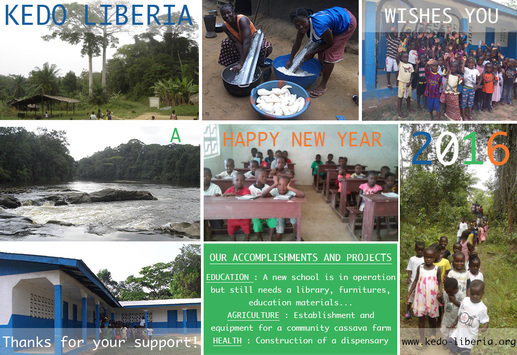 WISHES 2016
Kedo Liberia wishes you a happy new year, a year when the association will keep on developing its projects with enthusiasm !
SEPTEMBER 2015
SLOW REBUILDING AFTER THE HUGE HUMAN LOSSES FROM THE EBOLA EPIDEMIC

In May 2015, Liberia was officially declared Ebola free, but the human casualties were extremely high. Between January and May 2015, the epidemic had killed a total of more than 11,000 people of the 27,000 declared cases in the three affected countrie : Liberia, Sierra Leone and Guinea. Liberia, the country most affected, there was a total of 4 800 deaths from 10 500 declared cases. The healthcare delivery system was completely disrupted and ineffective. This tragic event would help to further weaken the government and its capacity to shoulder alone the enormous national development priotities.

Kpalo-Bli was not affected by the Ebola virus (probably because of its isolated location and the extreme difficult of accessibility during the raining season), but it had to confront the collateral risk of food stortage and basic commoditiies suffered throughout the country. During this period of restriction on the movement of people and transport, the market was not supplied, but the inhabitants of Kpalo-bli were able to survived due to their own agricultural production, especially cassava, rice and other lesser known eddible crops. So, now that that the country is gradually returning to normalcy after the Ebola epidermic, it is extremely important to consolidate and develop the agricultural potential of the village.

It is for the reason that Kedo-Liberia is mobilizing the 200 inhabitants of Kpalo-Bli around the collective community cassava farm initiative, and to remain focused so that the project is fully accomplished (see page ‘project’>>>).

The School
Despite all the difficulties, the classrooms were fully furnished, finally, in September 2015 – and thanks to the generosity and funding by the U.S. Embassy in Monrovia. The children now attend classes and study in a more comfortable environment. The school furniture (desks, tables, chairs and shelves) were made many months earlier in Greenville (Sinoe county) by Liberian furniture makers, but were not delivered to the village sooner because of the Ebola outbreak that paralyzed the movement of people and transport.
Though the school is functioning, but it still needs further improvements (construction of library, additional teachers, books, etc).

Unfortunately, after 14 years of a civil war, just as a renew hope was building up thanks to the KEDO's projects (see below),  the already  fragile situation is getting worse.

With the acute shortage of means to contain the propagation of this disease and save the population, any gesture to help is important.
JULY 2009 TO FEBRUARY 2014

The elementary school project started on 25 July 2009 with the help of villagers and partners was officially inaugurated in February 2014.
Additionnally a hand pump well was also constructed.

However, while classes are now being held at the new school, KEDO is still in need of funding to be able to fully complete the furnishing of the school with benches, desks and chairs for the students and teachers.

Feel free to support us >>>

THE PHOTOS OF THE NEW SCHOOL - fEBRUARY 2014