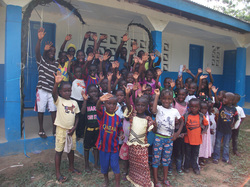 
Amoung the different missions of the KEDO association of Liberia, education component is critical.

It consists of several objectives:

. Build a school to provide education for children from the village of Kpalo Bli and its surroundings;
. Promote and encourage equal education for boys and girls;
. Build a library for the children of Kpalo-Bli;
. Support literacy programs for adults;
. Support the establishment of a multipurpose community workshop;
. Encourage compliance of the customs and their transmission to the younger generations.

With modest means, KEDO has already started the project of construction of an elementary school, which consists of four classes at Kpalo-Bli.

The launching ceremony of the construction took place July 25, 2009, in the presence of James Thomas-Queh and his wife Marie-Nelly who had undertaken the trip especially from France, marking their commitment to the project and their determination to contribute to its success.

The objective of KEDO is to develop and sustain the project over the long term based on the needs and available resources.

Currently, the construction of the school carried out by the general village community is completed ; and the first official school classes started in automn 2013. The official inauguration and opening of the school took place on February 22, 2014. See the different stages of the school construction in the rubric of photos >>>.

That said, there is still much needed to provide the children education under better conditions.
Therefore, the association continues to seek all possible donors >>>.


OTHER COMPONENTS:
The establishment of a collective community cassava farm 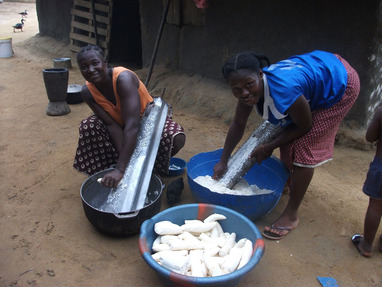 Apart from the education program, other development projects are in the making in order to improve the conditions on health-care (construction of a dispensary) and financial (developing market gardening, animal breeding, etc) of the inhabitants of  Kpalo-bli and surrounding villages.  In pursaunce of this objective, a collective community cassava farm has just been launched.

In Liberia, cassava is the second staple food after rice. However, currently the peasant farmers of Kpalo-bli cultivate the cassava at a mere subsistence level – mostly for personal consumption – as a suppliment to rice. Thus the rational for the establishment of the collective community cassava farm is to enable them – in a more organized manner – to produce in large quantity for both their personal consumption and commercial purpose.

The long-term benefit is to guaranteed their self-sufficiecy in food production and financial independence ; so that they can be able to establish and maintain their own institutions such as the school, the future dispensary and others.

However, today the road is still long and the task is tedious ; the self-sufficiency benchmark is not yet within reach. But with your support  we hope to continue assisting the inhabitants of Kpalo-bli to accomplish this laudable objective.